A fabulous experience of Carnatic music in Chennai last December and January at the Madras Music Season. What impressed in particular was the seriousness with which this traditional music is taken in south India. It truly is a living art, in a way that, at least in North America, Western classical music struggles with. In the Maris Hotel where I stayed, across from the Madras Academy of Music, there was even an in-house one-day music festival on Christmas. 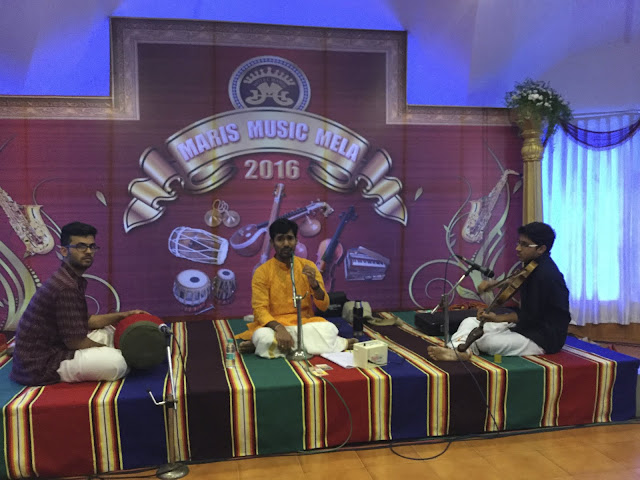 It featured seasoned veterans, as well as young players who were most impressive, some of whom were representatives from the Indian diaspora in North America, Australia and elsewhere. There seemed to be an endless supply of highly accomplished performers on tap for an intensive festival of some six weeks. Is every second person in Chennai a musician? The Music Academy was the focus of much of the activity, but there was also a wealth of performances at sabdas elsewhere in the city, which offered a synesthetic blend of music and  exquisite south Indian cuisine. A feast for the senses and the spirit.

What struck me after experiencing many hours of live performance was the effect the music had on the psyche. Even though Carnatic music is focused on the human voice in an improvisational context, there is no implicit self-aggrandizement in the music making. It seemed the performers were tapping into something prior to all that, something ancient and primordial, something imbued with the spirit and wisdom of the Vedas. Truly devotional music, and not simply because Krishna and Shiva were being invoked. In the West, liturgical music's embrace of secular operatic conventions beginning with Bach, Vivaldi, Haydn, Mozart and on into the 19th century, aroused considerable concern from ecclesiastical authority. In the Catholic Church the denouement came with the 1903 Motu Proprio of Pope Pius X on Sacred Music, a line in the sand in the face of perceived breaches of protocol. Yet typically, Bach above all mysteriously transcends and transmutes any such caveats.


The East/West divide is evident in the technical aspects of each tradition's music as well. To wax metaphysical for a moment, the drones in Indian music represent for me Brahman, pure awareness, Big Mind, that which is immutable and timeless. Within this formlessness the forms of the various ragas and talas appear and then disappear, the way ephemeral thoughts, feelings and sense perceptions do within immutable consciousness. Impermanence. There is not a sense of trying to 'get somewhere' other than where we are in the moment. In contrast, the Western ethos is all about forceful strategies for the attainment of some teleological omega point somewhere in the future. Indian music adorns the moment; Western music tends to weaponize it and use it as a means to an end. Yet, in tacit recognition of the glorious futility of such a trajectory, common practice classical music does at least begin and end in the same key and customarily on the same chord. Going nowhere, ultimately, but faster, louder, and more strenuously. Sojourning further from home through incrementally remote modulations and dissonances. Evidently the archetypal prodigal son project  Western music needed. But having taken the arduous journey and returned home, we are commensurately changed. Changed in the recognition that the journey was not from 'there' to 'here,' but from here to here. The West's yang and the East's yin. Coming to the same place. In the third millennium, perhaps the implications of that are about to be understood.